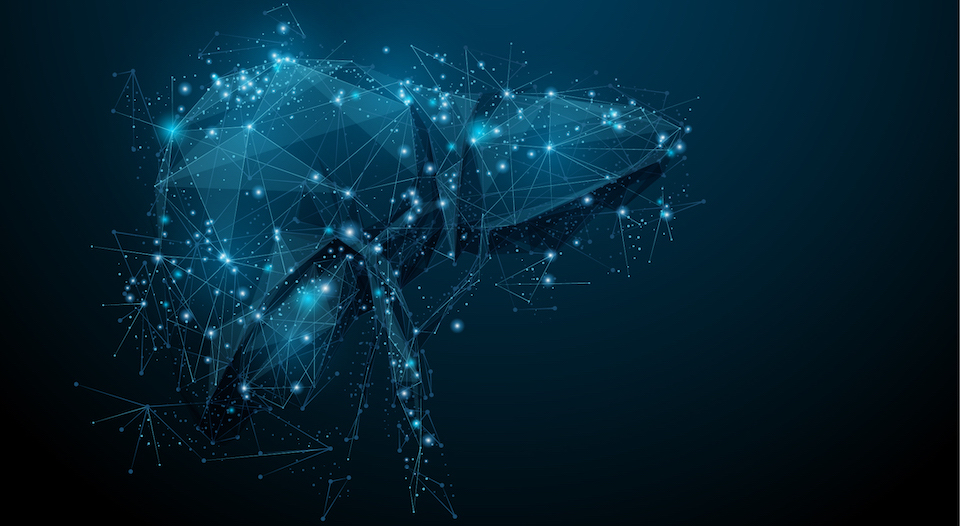 The liver is an incredibly complex organ—and its functioning leaves very little room for error. Even minor inflammation in the liver, caused by viral disease or other factors, interferes with the liver’s crucial activities of detoxification, synthesis, and storage, and can lead to significant health problems.

In healthy individuals, two-way interactions occur between the digestive tract (or ‘gut’) and the liver, with some of these interactions centering on the gut microbiome. The microbes of the gut create molecules as a result of their metabolic activities, and the molecules diffuse through the gut wall into the bloodstream and then move to the liver. In turn, the liver sends bile salts and antimicrobial compounds to the small intestine through the biliary tract. These bidirectional interactions comprise the gut-liver axis.

The epithelial lining of the gut is the ‘gatekeeper’ between the gut and the liver. When this lining is damaged, both microorganisms and microbial products diffuse more freely into the portal vein, which contributes to liver inflammation. This gut-driven liver inflammation is supported by work that shows an increased relative abundance of Enterobacteriaceae in liver autopsies of people with alcohol use disorder and cirrhosis, compared with healthy controls (16), potentially indicating bacterial translocation through the portal vein.

A handful of biotechnology companies around the world are working on gut-focused therapeutics for liver disease—and in particular, treatments that help dampen inflammation in the liver via the gut.

Shifts in gut microbiome composition are observed consistently in individuals with various liver diseases, with mechanistic links gradually being uncovered. Here are the main diseases being targeted with novel gut-liver axis therapeutics:

Multiple studies have found differences in the gut microbiota of individuals with NAFLD and NASH compared to healthy controls, but these differences show no apparent pattern from study to study. In general, people with obesity and NAFLD show reduced microbial diversity, while people with NASH have more ethanol-producing microbes (such as Escherichia) along with elevated blood concentrations of ethanol. Likely, the pathophysiology of these conditions relates to the gut microbiota’s metabolite production as well as its influence on bile acid concentrations. Building on this connection, MRM Health, working in conjunction with International Flavors & Fragrances, is advancing the LBP candidate M008 for treating NAFLD/NASH.. NovoBiome has a discovery platform, using multiple ‘omics tools to identify live biotherapeutic products (LBPs) that modulate activity in the gut-liver axis. The company has an LBP candidate, ADC-001, which is a strain of Adlercreutzia equolifaciens that targets NAFLD and NASH. Gelesis develops hydrogel capsules, taken orally as a “topical therapy for the intestinal wall”, reducing the intestinal permeability associated with a westernized (high-fat) diet and ultimately aiming to prevent NASH.

HE is a complication of advanced liver cirrhosis. The latest studies suggest the build-up of ammonia produced by the gut microbiota may drive the occurrence of HE, raising the possibility that the gut microbiota could be altered to reduce ammonia production. Proof of concept was found in a fecal microbiota transplantation (FMT) study, where FMT reduced hospitalizations and hepatic encephalopathy episodes in the test group, alongside alterations in fecal microbiome composition. Rebiotix is currently doing feasibility testing on a ‘microbiome restoration therapy’ candidate for the treatment of HE. Vedanta Biosciences has an LBP candidate VE303, comprising 8 non-pathogenic strains of Clostridia. The candidate, which is moving into Phase 2, is intended to improve cognitive function in individuals with a history of overt HE.

Scientists are in the early days of studying how viral hepatitis and the gut microbiota are related, but human data support the idea that gut microbes and their metabolites shapes both the onset and clinical course of these liver diseases. Studies have shown gut microbiota differences in those with viral hepatitis—primarily hepatitis C and hepatitis B virus infection. Indaptus Therapeutics is leveraging this using an approach that exploits the natural ability of bacteria to engage the human immune system and fight disease. Their candidate Decoy20, currently moving through pre-clinical development, consists of attenuated and killed non-pathogenic Gram-negative bacteria for treating chronic hepatitis B infection as well as hepatocellular carcinoma. Finch Therapeutics, however, has paused the development of an LBP candidate for chronic hepatitis B infection.

Liver diseases are some of the most serious conditions affecting the global population today—and new therapeutic options are urgently needed. With microbiome-focused companies taking a variety of approaches to targeting the gut-liver axis for improving liver disease, successful gut-focused drug candidates are bound to emerge in the near future.

previous
The latest updates from the microbiome drug development field in Europe
next
Highlights of Pharmabiotics 2022: New therapeutics and regulatory directions